Why Are Food Prices Going Up?

In this article I want to discuss the recent increase in food prices, why it’s happening, and what to expect in the future. There have been a few stories about this, and in June the Bureau of Labor Statistics released a report saying that food prices increased by 4.8 percent in the 12-month period going from June 2019 to May 2020.

Of course this can be location-dependent, and it also affects some foods more than others, so you may or may not have noticed it while shopping. But even though 4.8 percent might not sound like much, that’s the difference between something costing $10.00 and costing $10.48, it’s still a statistically significant change and it’s going to affect a lot of people.

In fact if you look at all consumer prices, the total increase was just one-tenth of one percent, so this isn’t just about inflation or something like that. It’s tough to make precise judgements about such a complex situation, there are a lot of variables involved, but I want to talk about the reasons behind this increase and see if they’re going to continue affecting prices for the rest of this year or even into 2021.

First I want to break down the increase in terms of how much prices changed for each category, and again this is all from the Bureau of Labor Statistics, the most recent data goes up to June 2020, and here’s the link to that information in case you want to look at the data yourself.

Basically it shows the monthly change for different categories starting in December 2019 and going to June 2020. It also displays the overall change for the 12-month period again ending in June. 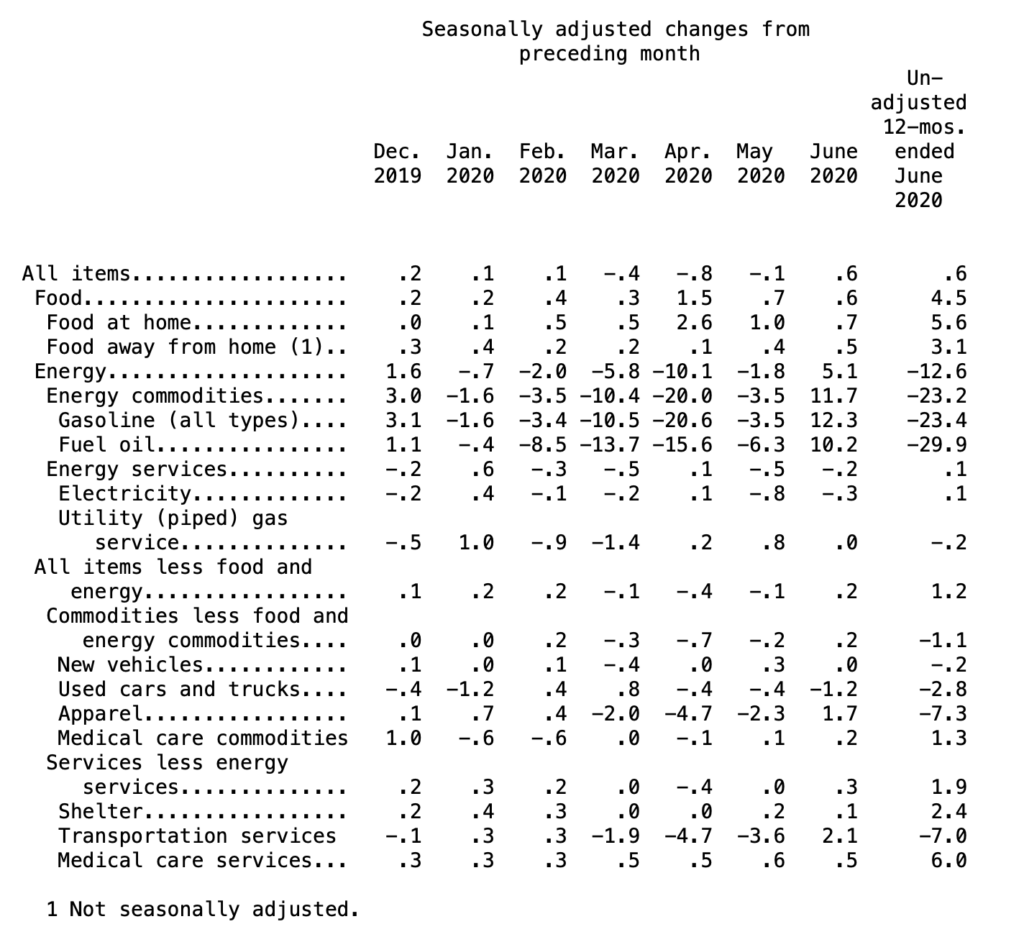 Again what’s interesting here is that prices for “all items” went up by just 0.6 percent, while food went up by 4.5 percent and food at home increased even more at 5.6 percent.

Food away from home, which includes places like hotels, bars, restaurants, colleges, and hospitals, only went up by 3.1 percent over the same period of time.

So even though there was an increase of food in general, it was even more specifically targeted to groceries. And even going deeper, there are a few specific types of food that got much pricier.

Beef, for example, got more than 25 percent more expensive over that 12-month period, while fruits and vegetables only went up by 2.5 percent.

When did prices start to rise?

Now some of these increases happened before the first coronavirus outbreaks, but the data clearly shows a significant increase starting in April.

Food at home grew by 0 percent, 0.1 percent, 0.5 percent, and 0.5 percent again from December to March, then 2.6 percent in April alone followed by 1 percent and 0.7 percent. And this was a month when prices in general decreased by 0.8 percent.

So that’s a sign that outbreaks and lockdowns could be related to the recent bump in prices, and they could be having a particularly strong effect on groceries.

Why did prices increase so suddenly?

Again it’s hard to speculate on exactly why food prices change at particular times, especially during a pandemic, with so much changing every month, some states are shut down at certain times, others are reopening, the virus went through NYC and some other cities early on, recently it’s been hitting the southern states, and this is obviously a developing situation.

But when you see such a sudden increase it’s clear that coronavirus is playing a major role here. The first thing that could account for that change is that people are staying at home, which means they’re eating fewer meals at restaurants.

This would also apply to students who would be eating in cafeterias,

How COVID-19 disrupted the economy

This isn’t an econ lesson, but basically what’s happening is that production and distribution are based on the expectation that there will be consistent demand.

Grocery stores expect to sell a certain volume of each product every month, that’s how much they order, the supplier charges the market rate for that order, and they charge a markup to the consumer in order to cover wages, rent, and other expenses.

Now the problem is that when more customers start showing up, they’re going to sell those items more quickly, which means they can afford to raise prices.

Of course they’ll be able to offset some of that demand by placing larger orders, but at the same time grocery suppliers can’t increase production immediately, and not all restaurant suppliers also sell to grocery stores.

There have been some creative solutions, for example some restaurant suppliers have started selling directly to consumers, but it’s impossible to totally reconfigure food distribution overnight.

So that means you’ll start to see shortages on some products, especially with coronavirus also disrupting supply chains, and when people hear about shortages they start stockpiling, which again makes the issue even worse.

On the other hand, just as coronavirus is making people buy more groceries, it’s also making it more difficult to supply those groceries in some cases.

There have already been several cases where meat packing plants, for example, had to shut down due to an outbreak. And anytime you have an increase in demand at the same time as a decrease in supply, it’s inevitably going to lead to much higher prices.

In a case like this, it wouldn’t be surprising for prices to remain distorted for as long as it takes to reorient the food distribution network to a model where people are buying more groceries. Again that’s a gradual process, and I think it’s one reason why the USDA expects food prices to be much more stable in 2021 once we overcome some of these challenges.

Now with that being said, there are some less obvious changes that could be involved in the trend here.

For example, seasonal labor is heavily involved in the food supply chain, and migrant workers typically make up a significant percentage of the workforce. Meanwhile most people are understandably reluctant to take those jobs right now, and immigration has gone down substantially since the outbreak started.

In fact the US issued just 48,376 visas in April compared to 424,886 in March, which works out to a decrease of almost 90 percent. So again this comes down to the fact that the market has been disrupted in so many ways, food distribution depends on seasonal workers, and it takes time to respond when the labor supply shrinks.

In some cases people have actually destroyed large quantities of food, which seems counterintuitive in times like these. You may have seen some of the stories from earlier in the pandemic where slaughterhouses culled millions of animals, and in April the Dairy Farmers of America estimated that farmers were disposing nearly four million gallons of milk every day.

When demand for restaurants collapsed almost overnight, businesses selling perishable foods weren’t always able to profitably redirect their stock to grocery stores, other distributors, or even by selling directly to consumers. At the same time, food banks are struggling to meet demand.

Why are businesses destroying food?

Obviously people need the same amount of food as before the pandemic, but it isn’t always that simple when supply chains depend on very specific processes and relatively stable market conditions. And with the US struggling to contain the coronavirus, it’s hard to say when, if ever, those things will return to normal.

Of course some of these practices will go back to the way they were over the next months and years, but some may be different for a very long time. In fact Yelp data shows that most restaurant closures will be permanent, and not every restaurant is listed on Yelp, but that indicates that this may not be about demand returning to typical levels, but rather supply shifting to match the new normal.

Now this is a complicated situation with a lot of moving parts, and as I said I don’t know what to expect for the rest of the year or into 2021. On the other hand, prices do seem to have stabilized since April, and hopefully that trend will continue over the next few months.

The changes have been more significant in certain food groups such meat, fish, and eggs, while things like dairy, vegetables, fruits, and cereals have been much more stable. So if you’re willing to buy less meat you should be able to cut down on your grocery budget.

Alright, folks, thank you so much for reading, I really do appreciate it, please be sure to stay tuned here and at my channel so you don’t miss any updates.