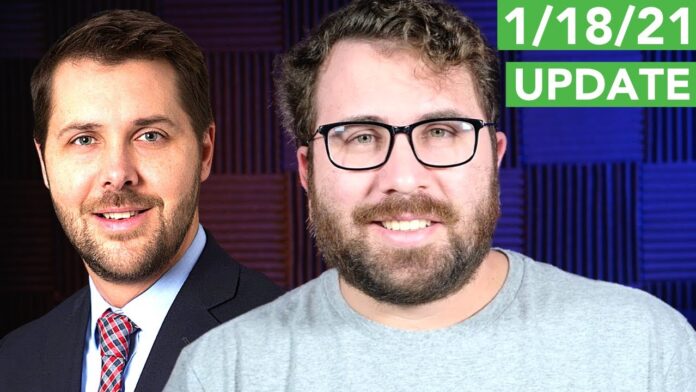 This is my update for Monday, January Eighteenth, it is of course Martin Luther King Jr. Day, which is a federal holiday, so it will probably be a quiet day in Washington, but I just wanted to focus on one interview yesterday on Fox News Sunday with Chris Wallace in which Chris interviewed incoming White House economic adviser Brian Deese about Biden’s stimulus plan, Deese will basically replace Larry Kudlow as the director of the National Economic Council, so this guy is basically the new Larry Kudlow, so just like we would like hearing what Larry had to say about things, we want to pay attention to what Brian Deese has to say.  So basically Chris Wallace was pressing Deese about Biden’s stimulus proposal, here’s the first clip:

Let’s drill down on specific parts of the package.  You are calling for another $1400 payment to the vast majority of Americans, why not target it just to those who have lost jobs, plenty of people are doing just fine, and then there is criticism from conservatives that you have snuck in a liberal wish list into this package, $20 billion for public transit, $9 billion for cybersecurity, raise the minimum wage to $15/hour.  Whether those last hours are a good policy idea or not can you really say they are part of emergency COVID relief?

Well, if you look at the core of this package, it’s going at those core packages, four hundred billion toward the vaccination effort and getting schools reopened.

Brian, you’ll get used to me interrupting, I’m asking though about these specific parts, transit, $15 minimum wage.  I understand some parts are clearly COVID relief but why add this stuff to the bill?

Well, let’s look at each of those.  The cybersecurity issues there are in wake of solar winds act, we have seen significant vulnerabilities exacerbated by COVID, we need those resources to secure our resources now.  Transit, our transit systems are facing an acute crisis and by providing relief now we can help to avoid diminished service and support when we come out of this crisis.  And the $15 minimum wage is a concrete way to help workers on the front lines right now providing services to all of us and give them direct support and a direct boost right now.

OK, so Wallace basically said, look, why are all these things not directly related on their face to COVID-19 in Biden’s stimulus plan, and then Deese basically attempts to connect all the things that Wallace brought up to COVID-19, some of it might be a stretch, but Wallace was satisfied with his answer to move on to discussing whether or not Deese believes that enough Republicans would get on board here in order to pass Biden’s stimulus plan, here’s the clip.

Then there’s the timetable for passing this package.

Plan A is to get the package through the Senate with 60 votes to beat a filibuster but you had Republican senators under Trump who refused to go over a trillion, do you really expect ten Republican senators to sign on to another two trillion dollars?

Well, I want to reinforce the urgency point that you raised.  Moody showed that if we act immediately on this plan and put it in place, the economy could create 7.5 million jobs this year.  And if you look at the components of the plan, $1400 checks, we’ve seen broad bipartisan support for that including Republican senators, you look at other elements like expanded Child Tax Credit, something Republican senators have promoted in the past, vaccination and school efforts — we’ve talked to governors and mayors across the country, say we absolutely need to surge support in the next couple months to get the virus under control.  There’s a lot of support for taking these actions so we see every reason Congress should move out and move out in a bipartisan way.

Personally, I think that Deese is being a little too optimistic here when it comes to how many Republicans are going to support this thing, he said that for fourteen hundred dollar checks we’ve seen broad bipartisan support for that including Republican senators, I wouldn’t call a handful of Republican senators “broad bipartisan support”, but Deese is for now sticking to the narrative that Biden wants to work in a bipartisan way with Republicans, and that leads to Wallace’s next question concerning eliminating the filibuster, here’s that clip.

Well look, we think we need to move quickly here.  But I would also say there’s a lot of skepticism that the President-Elect’s call for unity in working together was going to resonate, and he won the election resoundingly . A lot of skepticism that Congress would come together in December and deliver a down payment on this relief, and that happened, so let’s see where we can get here.  There is a lot of elements of this plan that have support across the board, both in Washington and in state capitals around the country, we need to act quickly.

Deese basically avoids the question of whether the Biden White House would support ending the filibuster, and he comes back to the theme of unity on Capitol Hill.  So at this point the Biden team isn’t taking off the kid gloves, so to speak, with Republicans, they want to work with them, and Deese didn’t even say the word “filibuster” here, so if Deese’s evasiveness here is indicative of the Biden administration’s position, ending the filibuster seems to be too hot of an issue right now, too potentially divisive for Biden to want to address going that route in the early weeks of his administration.  The focus now is simply on Plan A, see how well Biden can do in cutting deals across the aisle.  Then Wallace asked Deese about how the Senate will split its time between the impeachment of Donald Trump and everything that needs to get done for the people in the early weeks of the Biden administration.

Then speaking of acting quickly there’s the Senate trial of Donald Trump.  I know the hope is that Congress can work on a dual trick, part of the day on business (relief package, confirmations) and part on trial.  If you can’t get that, would there be some interest on Biden’s part to delay the trial, get some of the work done before Pelosi sends over the article of impeachment.

Well, look, we think there’s every reason we can move forward to address multiple issues.  We have multiple crises, we have a lot of pressing business facing the country, and so we understand and expect that the Senate will act on its constitutional duty.  There is precedent for the Senate moving forward to impeachment hearings while at the same time handling other business.  So that’s going to be our focus, to get an agreement and structure to allow that to happen, we want to move out on multiple fronts and make progress on multiple priorities.

So it sounds like, as we discussed last week, that the Biden team wants to see the Senate trial of Donald Trump happen concurrently with stimulus as well as with the confirmation hearings for Biden’s cabinet nominees and other nominees.  So at this point, it really looks like Biden wants to present himself as a unifier, he doesn’t want to come out at this point swinging, do you think this is the right thing for Biden to do here?  Or do you think he should start his administration playing a little bit more hardball with the GOP?