This is my stimulus update for Saturday, September 5, happy Labor Day weekend.

Trump Teases Another Round of Stimulus Checks

Well, yesterday, the Donald held a press conference and he was once again teasing stimulus checks.  He said yesterday that there’s some unspent $300 billion out there in some account, and $300 billion is coincidentally how much money another round of CARES Act-like stimulus checks would cost, and all he needs is a one-liner Congressional approval.

Anyway, here’s the clip or read the transcript below:

Trump: It’s time for the Democrats in Congress to start working across the aisle and put the American people first.  Now, we have $300 billion in an account that we didn’t use, and we are willing to use that, I would be willing to release it, subject to Congress, and use that as stimulus money, and it would go right to the American people, so we have $300 billion sitting in an account that we didn’t need because things are going so well with the economy, but it would be a very appropriate thing to release that to the American people, all we need is a sign-off.

So Donald Trump is saying that there’s some “account” with $300 billion in it that could be used for stimulus checks if Congress would just approve it with a bill.  Trump got a couple questions about this in the Q&A section of the press conference, here is the first one:

Reporter: Thank you, President Trump. If I could first ask a clarifying question about the 300 billion. You’ve ruled out doing that unilaterally, you’re going to wait for Congress to repurpose it for stimulus checks?

Trump: There’s a theory that I can do it without the approval, but I’d rather get the approval so that we have it. But there’s a theory I could take the 300 billion. It’s money that we have, money that we built up and money that we haven’t spent and I would love to give it to the American people as a very powerful stimulus. So, yeah, I think there is a theory that I could do it without having to go back. But I think it would be appropriate to go back and I would ask Congress to approve it. It’s a very simple approval. It’s literally it’s a one sentence approval. And the Democrats should do that, the Republicans will do that. It’d be glad to do that. So we’ll see whether or not they do it. Okay.

So Trump said he thinks Congress can approve this with just a single sentence, don’t need an entire bill, just Congressional approval to spend the money how the President wants, for stimulus checks.  So assuming this $300 billion exists, there hasn’t been a clarification from the president or his administration where this money is exactly, but assuming it exists, would Pelosi sign off on this?  She doesn’t want piecemeal, but we know that this stimulus checks really aren’t much of a bargaining chip for either side because both sides agree on them.

Well, we don’t know for sure, but my theory on this theory is that Trump is referring to theories of presidential power put forth by controversial Bush administration attorney John Yoo, who argued that in times of war executive authority could permit torture in the forms of waterboarding and other practices and that the President of the United States is not bound by the War Crimes Act.

We know that Trump has recently spoken to John Yoo with respect to his power to enact the questionable payroll tax deferral, and perhaps Trump is referring to these conversations as the “theory that he can [issue stimulus checks] without approval.”

What If Congress Deadlocks on Stimulus in September?

Now let’s just assume that the President cannot legally do this with Congressional approval, which most people, including myself, believe.

But think about it.  Let’s say Congress deadlocks on stimulus throughout September.  Let’s say it’s now early October with the election less than one month away, Trump tells Steve, let her rip, Steven sends out the checks with Trump’s big old signature on ‘em.

What are Democrats going to do?  Present a legal challenge to the President in the Supreme Court to prevent him from sending money to the people during the worst economic crisis of most of our lifetimes thus far?

This is very interesting, and if there is a President willing to pull something like this, I think it’d be Trump.  Act now, apologize later.  Putting on my cynic hat here, is this what the Republicans have wanted all along, is that why they’re releasing a $500 billion “skinny” bill next week that has no chance of becoming law because they want a popularity boost for the President just weeks before the election?  I don’t know, that’s all speculation, but I think we’re in for an interesting next few weeks in Washington, D.C.

Is the Money From the Main Street Lending Program?

Later on a reporter asked Trump if this $300 billion he’s talking about would be from unused money from the Main Street Lending Program.

Trump did not answer that question directly but just said it would be a great stimulus and that he hopes Congress can get on-board with his plan. 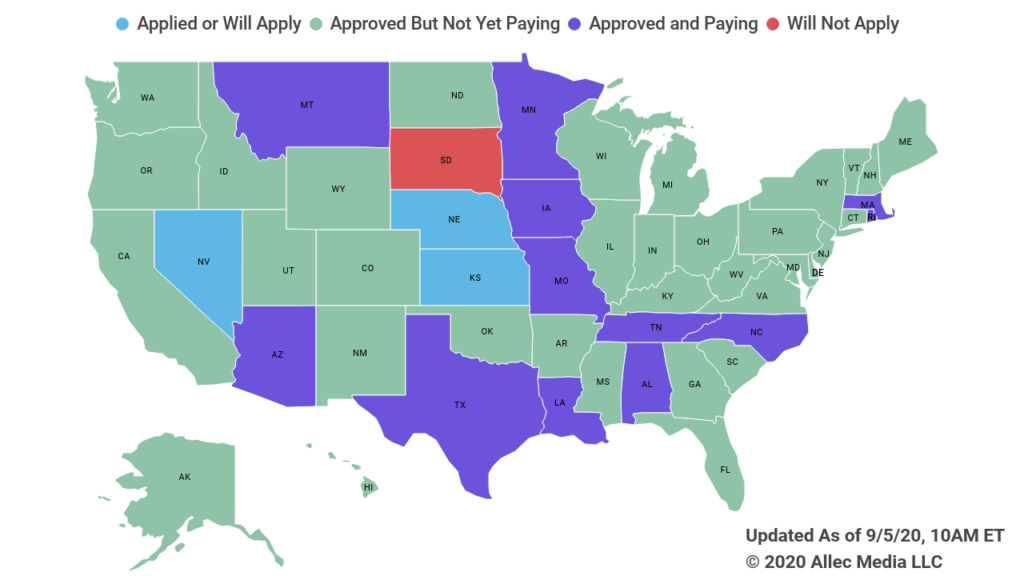