Is This All McConnell’s Fault?

This is my stimulus update for Wednesday, October 7th.

As you’ve probably heard by now, it’s all over the news, I wrote a post about it in the community tab yesterday when the news broke, President Donald Trump essentially killed stimulus negotiations yesterday, and then he kind of reversed course later in the day.

Yesterday morning, let’s just start there, as I told you in my update yesterday, Federal Reserve Chairman Jerome Powell called for more stimulus, essentially urging our representatives to “think big” and not to worry about the implications of thinking too big.

Yesterday around 1:00, 1:30 P.M. Eastern Time, Donald Trump was on a call with Treasury Secretary Steven Mnuchin, House Minority Leader Kevin McCarthy, and Senate Majority Leader Mitch McConnell.  It is said by two anonymous sources that on this call Mitch McConnell told Trump that Nancy Pelosi was stringing him along with stimulus negotiations.

I take this to mean that McConnell, knowing that he, himself, McConnell would have an unpopular, uphill battle wrangling enough Republican support, enough Republican votes in the Senate, to push a bill through, told Trump, and this is just my imagination here, but I imagine Mitch said something like, “You know, Donald, Pelosi’s making a fool of you.  She has no intention of getting a deal done before the election, why would she?  She just wants to make you and Stevie here look like a couple of fools.”

After McConnell said something like this to Trump, Trump became enraged and at 2:42 PM Eastern Time yesterday tweeted the tweets I showed you in my post in the community tab, and I’ll read them for you here: “Nancy Pelosi is asking for $2.4 Trillion Dollars to bailout poorly run, high crime, Democrat States, money that is in no way related to COVID-19. We made a very generous offer of $1.6 Trillion Dollars and, as usual, she is not negotiating in good faith.

I am rejecting their request, and looking to the future of our Country. I have instructed my representatives to stop negotiating until after the election when, immediately after I win, we will pass a major Stimulus Bill that focuses on hardworking Americans and Small Business. I have asked Senate Majority Leader Mitch McConnell not to delay, but to instead focus full time on approving my outstanding nominee to the United States Supreme Court, Amy Coney Barrett.

Our Economy is doing very well. The Stock Market is at record levels, JOBS and unemployment also coming back in record numbers. We are leading the World in Economic Recovery, and THE BEST IS YET TO COME!”

And then a couple hours later he tweeted, “Crazy Nancy Pelosi and the Radical Left Democrats were just playing “games” with the desperately needed Workers Stimulus Payments.  They just wanted to take care of Democrat failed, high crime, Cities and States. They were never in it to help the workers, and they never will be!”

Of course, this is highlighting the major difference between Republicans and Democrats with stimulus, the state and local assistance.

Then Trump retweeted several tweets by conservative author and conspiracy theorist Paul Sperry pertaining to the Mueller investigation, with Trump saying that the truth must come out, must come to light about the investigation.

Is This All McConnell’s Fault?

Now, let’s not put this all on McConnell. We know Kudlow hates stimulus, he won’t say as much, but you can just see it in the interviews and the way he responds to stimulus questions.  And just this morning Kudlow was on CNBC saying, yeah, there’s just not enough time before the election, we have so much to do, we have the Supreme Court, etc.

And Washington Post is reporting that various economists have influenced Trump recently telling him to essentially not approve a stimulus package or push for one, and I think McConnell’s statement was the straw that broke the camel’s back, right, and of course McConnell did support Trump in his decision to kill stimulus negotiations.

But, later in the day, I think Trump probably saw other Republican lawmakers being extremely frustrated at the fact that he killed stimulus negotiations, Representative John Katko for instance, Senator Susan Collins.  Also, let’s face it, Trump loves touting the stock market, I imagine he saw the stock market tanking, so what did he do?  At 9:54 PM Eastern Time last night, he tweeted: “The House & Senate should IMMEDIATELY Approve $25 Billion Dollars for Airline Payroll Support, $135 Billion Dollars for Paycheck Protection Program for Small Business. Both of these will be fully paid for with unused funds from the Cares Act. Have this money. I will sign now!”

About 25 minutes later he tweeted, “If I am sent a Stand Alone Bill for Stimulus Checks ($1,200), they will go out to our great people IMMEDIATELY. I am ready to sign right now. Are you listening Nancy?”  And then just this morning he tweeted, “Move fast, I am waiting to sign!” tagging Nancy Pelosi with respect to a standalone stimulus check bill.

Mark Meadows, by the way, did confirm this morning that stimulus negotiations are off, but he did say that Mnuchin is still looking into standalone bills for airlines and small business, kind of mirroring what the president tweeted.

Mnuchin and Pelosi Spoke This Morning

And Pelosi and Mnuchin did speak this morning at 9:33 AM Eastern Time, Mnuchin asked Pelosi about a standalone deal for airlines and Pelosi told him that Republicans blocked that deal last Friday.

By the way, the stock market is of course up today from where it closed yesterday, it rebounded so to speak in light of Trump’s later tweets.

Now, what scares me here is that Trump said that there’s this extra money from the CARES Act that he wants to put toward airlines and small business.

So my concern here, and he hasn’t explicitly said this, but if he is just looking to reallocate old CARES Act money, he might just be looking to do that for airlines and small business not necessarily stimulus checks like he had implied before.  That’s just my take here, could change, we’ll see.

But stepping back here, this is certainly something else.  And Trump is honestly trying to play both sides here.  As I wrote in my post in the community tab yesterday, he’s trying to put stimulus out there like a carrot on a stick for the American people to vote for him, and it’s an empty campaign promise.

Like I said in my post, it’s “empty” because even if Trump wins the election (despite the fact that Biden is up across almost all polls) and Republicans retain the Senate, there’s no way that Democrats are losing the House.  So even in a best-case election scenario for Trump and the G.O.P., “immediately” after the election obviously nothing will have changed from where it is today, nor would anything change in January with the new Congress in this scenario.

They will still have to deal with Pelosi just as they are dealing with her today.  Even in a best-case scenario for Republicans where they retain the White House and the Senate, the election isn’t going to change the fact that they will still have the Democrat-controlled House and Speaker Nancy Pelosi to deal with in any negotiation.  This is an empty campaign promise.

And he’s also saying look, we have to focus on the Supreme Court, that’s what Kudlow was saying as well, that’s not a popular move, even among those who support Judge Barrett’s confirmation.  They would still want to see stimulus as the priority and then the Supreme Court.

Trump Trying to Play Both Sides

But of course now Trump is also trying to play stimulus as a reason to elect him.  Here’s a carrot, folks, and guess what, you’ll get an even bigger carrot if you vote for me.

He’s clearly freaking out about the polls, about the election, he’s medicated, and this is just crazy.  Those initial tweets in which he said he was killing stimulus negotiations, those were less than 24 hours after he left Walter Reed.

He’s clearly trying to make big moves right now to portray himself as a recovered, healthy, vigorous strong man, I mean did you see the White House video of Trump returning to the White House, it was clearly an attempt to make him look like some legendary American hero.

Pelosi said in a statement yesterday, “Today, in an act of desperation, the President has told the GOP Senate to “focus full time” on confirming his nominee to the Supreme Court to overturn the Affordable Care Act instead of crushing the virus and meeting the needs of the American people. His irresponsible statement and policies have damaged lives, livelihoods and the life of our democracy, instead of crushing the virus, honoring our heroes — in health care, first responders, sanitation, transportation, food workers, teachers, teachers, teachers and others — and putting money in workers’ pockets,” link to her full statement is in the description below.

Where Do We Go From Here For Stimulus?

So we’re back at where we were weeks ago, except now, instead of having a glimmer of hope for congressional stimulus negotiations before the election, there’s a nail in the coffin, and our best hope — again, I’ve said this so many times — our best chance, and it’s a slim chance, I’m not saying this is guaranteed, but now that Trump is back in the White House, and I’ll admit, he was discharged and back in the White House a lot faster than I thought he would be, but needless to say now we’re back to where we were, with our best chance, and it’s an extremely slim chance, at stimulus before the election being some bold moves from a freaked-out commander-in-chief in a COVID cesspool of a White House. 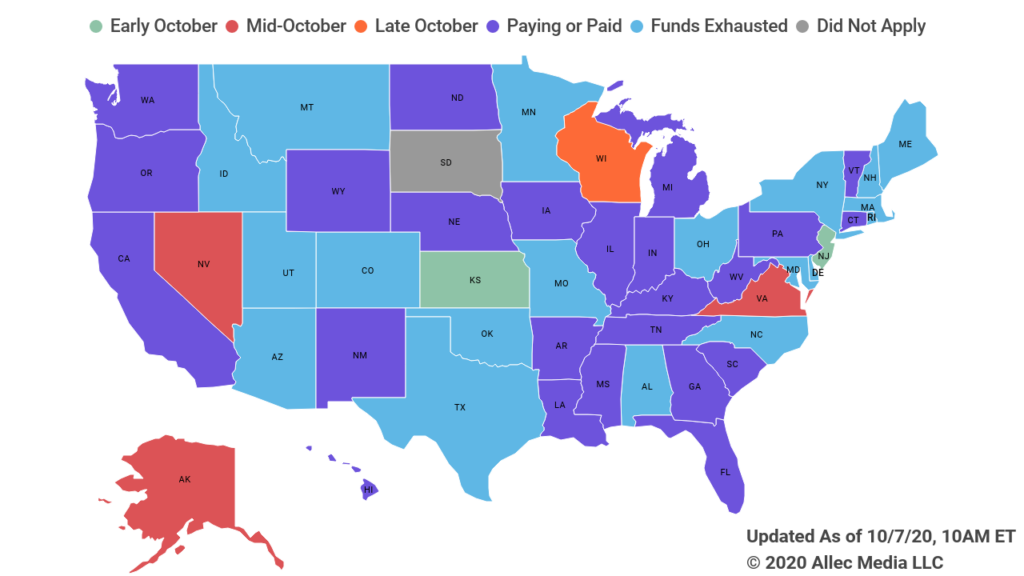 Briefly on unemployment, not much has changed on the unemployment front, so we’re still waiting for those six states to start paying people their money.