How to Spot a FAKE Stimulus Check

And it wasn’t until after President William McKinley was assassinated in 1901 that the Secret Service assumed the role we know it for today, which is protecting the president.

But part of their mission is still to crack down on counterfeiting.

How to Spot a Fake Stimulus Check

Now, if you suspect your stimulus check looks kind of funny, I would normally say go to your bank and tell them your concerns, but I know a lot of you out there are strongly preferring mobile deposit right now due to coronavirus, so it’s good you know these things yourself.

OK, the first thing, the memo line, to the bottom right of the Statue of Liberty, it will say “Economic Impact Payment” and then underneath that “President Donald J. Trump,” yes, just the words, not his signature.

Also, it’s Trump’s name, President Donald J. Trump, not his signature that appears on the check.

A lot of media outlets were misreporting that his signature would appear on the check, that is false, fake news, it says “President Donald J. Trump”.

So if you get a check in the mail with anything other than these exact words as they appear here on the memo line, that’s a fake check.

Next thing, the Treasury Seal.

To the upper right of the Statue of Liberty is the Treasury Seal.

At the top of this seal it should say, “Treasury”.

Then along the bottom of this seal it should say, “Bureau of the Fiscal Service”, OK, so if you see anything other than those words, know that it is fake.

Exception: to print your check, the Treasury may be using old check stock which says “Financial Management Service” along the bottom of the seal instead of “Bureau of the Fiscal Service”, OK.

Also, the seal has bleeding ink, meaning that it contains security ink that will run and turn red when moisture is applied to it. 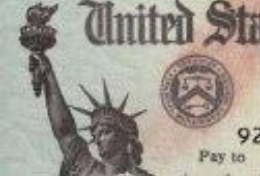 I would not recommend applying moisture to your check if it looks legit, but if there is anything about it that gives you pause, you might want to apply a little bit of moisture to the black ink of the Treasury Seal and see if the ink will run and turn red.

Next thing, the watermark.

All U.S. Treasury checks are printed on watermarked paper.

The watermark reads “U.S. Treasury” and can be seen from both the front and back of the check when held up to a light.

If your supposed stimulus check doesn’t have the watermark, that’s a fake check.

Also, the checks have ultraviolet overprinting that is visible under a black light.

So if you hold the check underneath a black light, you should see something like this.

Now, to make this kind of confusing, some legitimate checks may instead of “FMS” say “FISCALSERVICE” in the ultraviolet overprinting, this is because this is old check stock that Treasury is still using today.

There’s an area on the back of the check with the words, “Warning – do not cash check without noting U.S. Treasury watermark.  Hold to light to verify watermark.”

Underneath those words is what will appear to the naked eye to be a line, but if you bust out a magnifying glass it will say in super tiny letters USAUSAUSAUSAUSA all across. 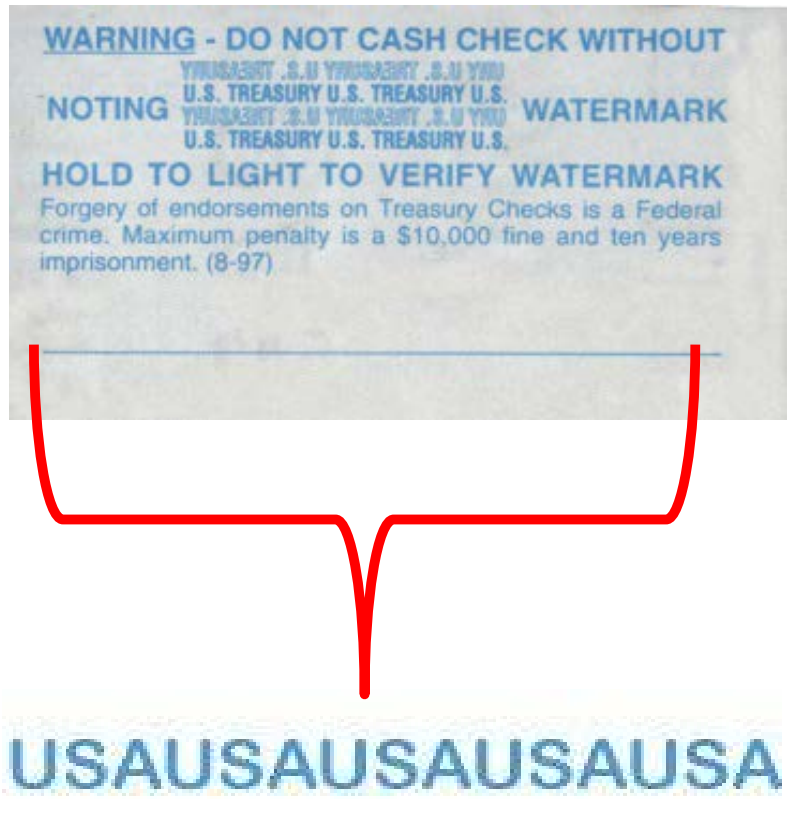 Now obviously most counterfeiters don’t have the capability to make text this small so on a counterfeit this will likely just appear, even under a magnifying glass, just a plain line.

But the legitimate Treasury checks will have microprinting here.

If you think you’ve received a fake stimulus check, here’s what the government says you should do, it says to contact everybody, but I’m gonna say, if you have the time, by all means contact all of these agencies, but if not, I would say at the very least go to ic3.gov, that’s the FBI’s Internet Crime Complaint Center, OK, they have a form there that makes it very easy to report scams, not just stimulus check scams but if there are other stimulus-related scams that you come across, report them there so the FBI can investigate it and hopefully the scammers will be shut down.

Obviously hold onto the fake check, and do whatever these agencies want you to do with it.