This is my stimulus update for Thursday, September 17.

But let’s back up, big stimulus news of the week is that this Problem Solvers Caucus, which is a group of fifty House Republicans and fifty House Democrats, released a pretty decent stimulus proposal that meets a lot of needs, but House Democratic leadership shot it down hours after the proposal was released.

Members of both parties have criticized that move, including Democratic members of Congress as I told you yesterday as well of course as President Trump.

As I told you yesterday, Trump tweeted, “Hey, Republicans, shoot for the moon with stimulus, remember, it all goes back to the people, it’ll really help with the election.”  What did he mean by that?

What did he mean when he said, “Go for the much higher numbers, Republicans”?  Well, White House Press Secretary Kayleigh McEnany interpreted Trump’s remarks for us, here’s the clip.

Reporter: Okay, thanks. And the President said on Twitter today that Republicans should go for a much higher number when it comes to the stimulus. What did he mean by that exactly? And has he spoken to Senator McConnell or Speaker Pelosi about what number he has in mind?

Kayleigh Mcenany: Yeah, so what the President was referring to was the $500 billion bill that passed the Senate. The phase four plan that didn’t include — excuse me, it didn’t — it got 50 votes in the Senate. It’s that $500 billion “skinny” proposal. But it didn’t include direct payments. So he wants more than the $500 billion, and he is very keen to see these direct stimulus payments, and we hope that Nancy Pelosi will work with us in good faith.

There are many bipartisan proposals out there that have merit. And a clear example of where Nancy stands is that everyone wants to be — in D.C., seems to want to make a deal, except Nancy Pelosi. She wants to play politics. Look at the letter she wrote condemning the Problem Solvers group proposal. That was a $1.5 trillion plan that, if the priorities were modified and made sure that there was not bailout that bailed out states that didn’t have COVID-related issues, that just were blanket bailouts to blue states, that’s something that we would entertain and look at. But Nancy Pelosi immediately decried that proposal in a letter because she’s not interested in a deal.

There are a couple issues with what McEnany said, the skinny bill that Republicans voted for in the Senate was not $500 billion dollars, it was about $650 billion dollars, but $350 billion of that consists of offsets and old money, such as CARES Act money, so there’s really only $300 billion in new money, very skinny, not sure where McEnany got the five hundred billion, we know that it was rumored to be $500 billion, that’s not where it ended up.

Also, 52 Republican senators voted for it, not 50.  Anyway, point is, we have the White House Press Secretary saying that what Trump meant yesterday when he tweeted, “Hey Republicans, go for the much higher numbers,” all he was referring to is the stimulus checks on top of the bill that Senate Republicans voted on last week and of course she took the opportunity to criticize Pelosi for her rejection of the Problem Solvers Caucus’ proposal earlier this week.

Honestly, I was a little disappointed in this statement by McEnany because we’ve heard Mnuchin, who essentially speaks for the White House on stimulus matters, say that the White House could go as high as one-point-five trillion dollars on another bill, and Mark Meadows just said this morning on Fox and Friends that the president would be open to a one-point-five trillion-dollar bill, but of course adding stimulus checks to the skinny bill would only amount to less than half of that number in terms of new money.

Of course Trump could be open to a $1.5 trillion dollar stimulus package as much as he wants, but whether or not Congressional Republicans would go for $1.5 trillion is another matter entirely, we know that Republicans in Congress yesterday after Trump tweeted, “go for the much higher number, Republicans,” several Republicans were pretty meh about that.

The number two Republican Senator, John Thune, said in response to Trump’s tweet, “If the number gets too high, anything that got passed in the Senate will be passed mostly with Democrat votes and a handful of Republicans so it’s gonna have to stay within a realistic range if we want to maximize, optimize the number of Republican senators that will vote for it.”

And the number one Republican in the House, Kevin McCarthy, said, “We’d have to see what’s in it, but I think it’s difficult.”  And Republican senator Ron Johnson said, “We did the right thing [referring to the skinny bill].  The president has his opinion, we have ours.”

At least one Republican senator was more optimistic though, Roy Blunt of Montana said, “I think there’s a deal to be had here.  My concern is that the window probably closes at the end of this month and we need to get busy finding out what we can all agree on. And I think the number is going to be higher than our trillion dollars.”

Democratic leaders have also taken Trump’s stimulus tweet yesterday and run with it, Pelosi and Schumer got a bit cheeky yesterday, kind of releasing this tongue-in-cheek statement in response to Trump’s tweet, they said, “We are encouraged that after months of the Senate Republicans insisting on shortchanging the massive needs of the American people, President Trump is now calling on Republicans to ‘go for the much higher numbers’ in the next coronavirus relief package.  We look forward to hearing from the President’s negotiators that they will finally meet us halfway with a bill that is equal to the massive health and economic crises gripping our nation.”  Of course, they may have been disappointed to hear Kayleigh McEnany basically say, yeah, he was just referring to the stimulus checks, or are they?

So all this is to say that there has been a lot of chatter this week with respect to stimulus, but unfortunately, as the smoke has now cleared, we’re still in the same position in terms of negotiations: Pelosi would entertain $2.2 trillion, Republicans $1.3, maybe $1.5.

I think if anything has changed this week a bit of public opinion is probably more so shifting against Democrats.  As I explained a couple days ago going over the Problem Solvers Caucus’ proposal, it’s a good stimulus proposal.  White House, Mark Meadows, said he liked it, but Democratic leaders scoffed and killed it.

Colorado has hit a snag, we thought payments would hit this week but it looks like there is a delay with their system and certifying and all that, I’m hoping to see Connecticut this week, Kentucky looks like it paid some people for only $400 for one week, still waiting on the rest of the money, still no payments from New York despite what their Department of Labor tweeted, Oregon I bumped down to late September from mid-September, and Pennsylvania I have seen some reports of people getting paid. 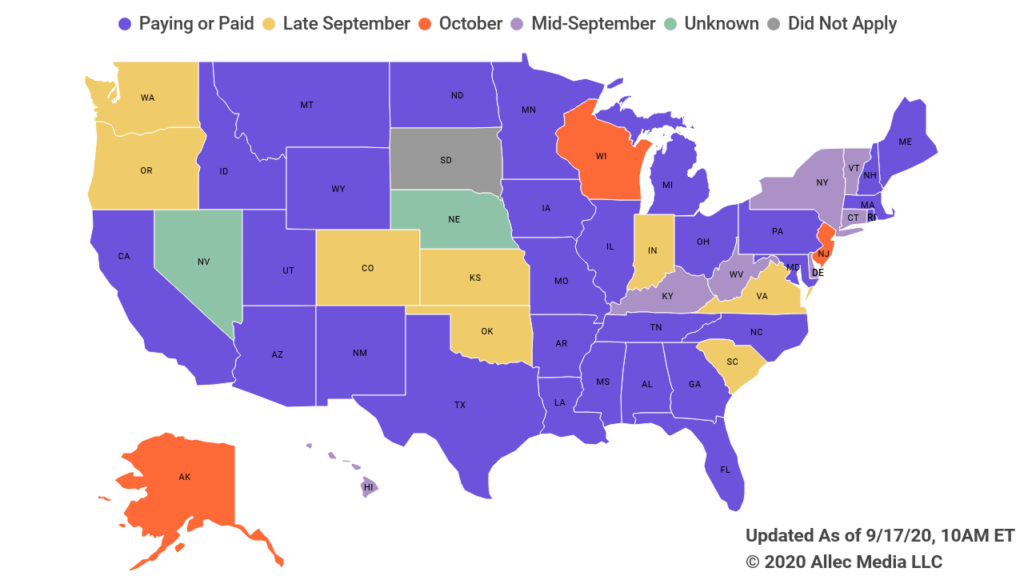 I will remind that this map here is simply my guestimates based on reports I’ve seen around the internet as well as statements from the states labor departments as well.