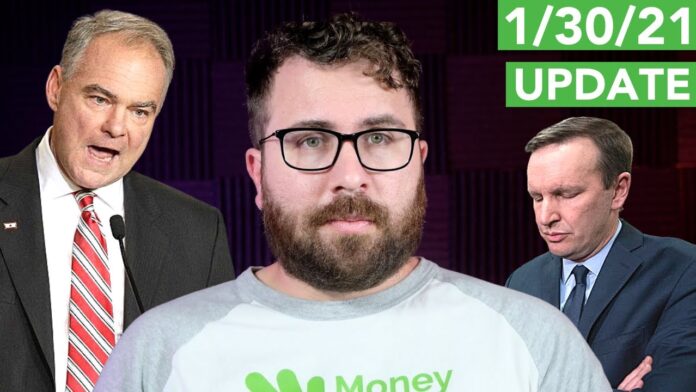 This is my update for Saturday, January 30th. A week or two ago, it looked like there was maybe at least some momentum behind the impeachment trial in the Senate—for example, when Mitch McConnell said that “the mob was fed lies”, it started to seem like there could be room for some Republicans to cross party lines.

At this point, though, it’s pretty clear that there aren’t going to be enough votes to convict, and the next question is how that’s going to affect the trial or if it’s even worth it to the Democrats to run a trial if they know how it’s going to end. Yesterday Senator Tim Kaine said “I just felt, as outrageous as the behavior was and as much as accountability is needed, I just didn’t see a way that Republicans would get to 17 votes to convict.

I thought about it as soon as the House started to do it. The urgent need is COVID relief and I know Chuck [Schumer] feels the same way.” Chris Murphy, another Democratic Senator, questioned the plan to proceed immediately with an impeachment trial when he said “my point privately was not necessarily that we shouldn’t hold a trial, but we needed a couple weeks to get the Cabinet in place and to get COVID relief moving.”

So ultimately it’s going to be hard for them to justify the impeachment trial as a key part of the agenda for the first few months of the new Senate, especially when they have so many other legislative priorities, including stimulus, and it doesn’t look like the trial is going to lead to the result they’re looking for.

They still have some options—they could continue with the trial now, they could switch from impeachment to a vote of censure, which only requires 50 votes instead of 67, or they could table the whole thing for a few months and come back to it when they have a chance to set the rest of the agenda in terms of a stimulus bill and other time-sensitive issues.

Unfortunately, I mentioned in one of the updates this week that Biden was planning to boost vaccine distribution to 10 million doses per week, but that plan is starting to look a little optimistic with the complications the administration is facing in getting these doses out. Politico reported today that they are currently looking for more than 20 million doses that have already been sent out to states—ok, so the federal government distributed them, there’s no record of them being administered, and now they are having trouble accounting for them.

And obviously that gets even more challenging when you add in that the White House just switched hands and Biden is trying to implement his own COVID agenda while he takes over the situation from Trump.

They believe that out of those 20 million doses that aren’t accounted for, only roughly 2 million are in that set due to a lag in reporting, which means around 18 million of them are still stuck somewhere in the distribution process. So the federal government has to distribute the vaccines to states, the states have to distribute them to local health departments and local health providers, and then they finally need to administer those doses.

And the federal government doesn’t have any control or any access to information after the doses get to the individual states—they get an update when the doses are actually used, but they can’t see where these 18 million doses are or how close they are to being administered.

So a lot of the work for the new administration has simply been trying to locate the existing doses and make sure they get distributed quickly, and that could make it tough for them to hit their goal of 10 million weekly vaccinations, at least in the near future.  On a more positive note, the Biden administration also announced a plan to release weekly reports on state COVID-19 data.

Here’s the link to the report from January 27th in the description in case any of you want to see what’s happening in your state. Here’s a piece of the report for Alabama, for example, it covers the number of new cases and deaths, the number of tests administered and how many came back positive, the number of hospital admissions, and it even shows the situation in each individual county and metropolitan area.

Now this data existed before, the Biden administration didn’t create it, but the Trump administration would only provide it to state officials rather than making it available to the public. The initial set also included a note that the format and content are under review, so these reports may look different next week, but overall it’s great that we can at least see this information.

I know the vaccine plans are very different in each state, some states seem to have this figured out better than others, but hopefully they can streamline distribution in the near future and we can start getting back to normal.